3D printing – the next industrial revolution? 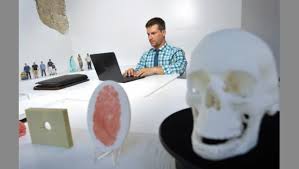 Will 3D printing be the most important – and amazing – technological development of the next decade?

Think about it. Potentially we will all have the ability to download templates from the web, purchase the basic ingredients we need (the ‘ink’) and then create whatever we want, in our homes, offices or wherever? According to the BBC, printers for home use cost around £1,000 which seems to be the standard ‘starting price’ for new technology kit, and which so far at least, have quickly tumbled.

“3D printing has been used to output, from a printer, a bewildering variety of physical three-dimensional objects, including, but not limited to, loudspeakers, scientific laboratory supplies, a nano-sized racing car, chocolates, a transplantable human jawbone, dinosaurs, and even—disturbingly—guns,” says Richard Romano.

Jawbones have been created out of titanium powder but one report states that functioning human kidneys have been ‘printed’ using human tissue – the recipient’s own cells – as the ‘ink’.

A 3D printer works via a process called additive manufacturing (AM). The principle behind AM is to deposit layer upon layer of a material – ink, powder, human cells, metals, etc – driven by data from a computer-assisted drawing (CAD) file. These layers are extremely thin – some machines now print at 20 microns – a 50th of a millimeter thick. “Think of it as on-demand manufacturing,” added Romano.

For some governments – those whose economy is based on a manufacturing sector – it could be catastrophic. As Rory Cellan-Jones said on the BBC, it takes the ability to manufacture out of the factory and moves it into small design studios. But the potential is vast and it will certainly mean re-writing, at the very least, many business models.

“It’s a whole new way of producing individual, customised objects,” said And Millns from London-based Inition, on the BBC programme. “And you can have it in your hand within hours rather than wait for it to be shipped around the world.” It’s not just customised items, though. 3D printing will allow us all to make comoditised goods.

“As 3D printers become cheaper, they could change the whole economics of manufacture and repair – it might be cheaper to make some parts at home, more complicated parts at the local 3D printing bureau, and leave only the largest and most complex items to the professionals,” said Neerav Bhatt.

There is one major problem: intellectual property rights. “People have no qualms today about wantonly exchanging music or movie files. What happens when people have no qualms about exchanging object files? Who will own the rights (probably a patent) to the CAD file used to generate a 3D object?,” said Romano.

Neerav Bhatt agreed: “It will bring the issue of copyright to the fore – who owns the designs? The launch of a new ‘Physibles’ section on the Pirate Bay website shows how the effects of 3D printing on intellectual property laws will need to be considered in depth, otherwise Pirate Bays of the future will contain easy-to-download music, movies, TV – and digital CAD files for all the latest gadgets to print up at home.”

But the pluses are huge, not least being environmental. A home-fabricating revolution, accompanied by decentralised, local manufacturing, has the potential to significantly reduce the carbon footprint of most items.

The big bonus, of course, will come from the business opportunities offered and the benefits it can bring to many. So, will 3D printing herald a whole new industrial revolution?